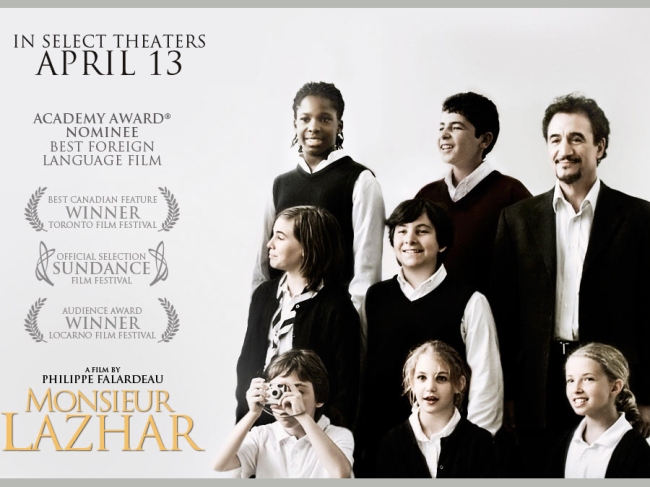 “Monsieur Lazhar”, directed by Philippe Falardeau, is a simple and understated Canadian – French drama, which quietly addresses and confronts the often difficult subject of grief and sudden loss. Set in Montreal, Quebec, the film opens like a myriad of other films about school life, full of zest and optimism; this is until a student, Simon (Émilien Néron) makes a tragic discovery in his classroom which alters the tone of the film immediately. The piece then diverges and follows the journey of Bachir Lazhar (Mohamed Fellag), an Algerian immigrant, who then acts as a temporary replacement teacher, who now has the difficult and daunting task of motivating and instilling some joy into his now forlorn and despondent students.

This thought-provoking film then explores how young children, when thrown into a situation beyond their control and which they cannot fathom,  attempt to continue their daily routine despite being crestfallen. As the film progresses, we see Monsieur Lazhar, slowly gaining both the school’s and the student’s trust through his thoughtful care and compassion approach and steadfast methods though it also touches upon the “professional” aspect of the field, with such deep emotions at play, all sides have to repress their feelings and find another avenue for their hurts.

The film conveys how in tune children can be to their own emotions and the feelings of adults around them, who themselves, have to deal with the consequences of what has occurred. The two most inconsolable students are Simon and Alice (Sophie Nélisse) as they witnessed the incident and are haunted by what they have seen and are scarred. Monsieur Lazhar himself, though, is troubled by his own recent past and these present experiences prove painful for him yet also provide him with his own time-worn ways to help the students deal with their emotions. Through the film, we eventually saw Lazhar’s past catch up with him and the film takes yet another subtle turn.

“Monsieur Lazhar” is an understated and modest piece which deals with the dynamics between adults and children as well as how both adults and children deal with loss. The students are unable to express themselves fully yet Lazhar is there to listen. Lazhar does not expect his students to comprehend the magnitude of what has happened but in his own compassionate and thoughtful way, he offers them something else, hope.

Such was the esteem that the, was held that it was nominated in the “Best foreign Film” category at the 84th Academy Awards. The film eventually lost out to the Iranian film, “A Separation” but this definitely did not take anything away from the film.

A compelling and human drama with moments of subtle humour and happiness.