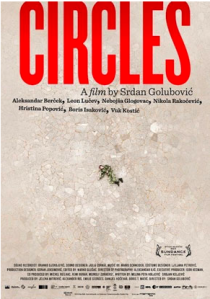 “Circles” (Krugovi) delves deep to investigate the ripple effects of a single incident and the repercussions that a single moment can have much further down the years and how it can affect the lives of those involved as they seek to move on.

Serbian director, Srdan Golubovic, chose to tell a true story of hope in the midst of tragedy; Srdan Aleksic, a Serbian soldier (played by Vuk Kostic who plays “Marko”) paid the ultimate sacrifice for trying to save his Muslim friend at the height of the conflict (1992-5) in Bosnia and Herzegovina. The incident takes place in Trebinje (1993) and lays the basic foundations for the rest of the piece but not all is immediately revealed; a sense of mystery lingers as three separate yet intertwined stories continue throughout the film until the conclusion when they all come together.

The three interweaving stories, set 12 years after 1993, stretch from Trebinje, Bosnia, to modern-day Germany. The first follows Haris (Leon Lucev), the Muslim shop keeper who was attacked, who has since rebuilt his life in Germany and is known to help his fellow refugees given his own traumatic experiences. Haris is contacted by Marko’s ex fiance (Hristina Popovic) who is on the run from her now husband.

The second story follows Marko’s good friend (and doctor) who witnessed the incident yet was powerless to do anything; now years later, as a top surgeon, he comes face to face with one of the aggressors on the day, who lays dying on his surgery table. The final chapter comes in the form of Marko’s father (Aleksander Bercek) who channels his grief into building a new church.

He is one day approached by a young teenager (Nikola Rakocevic) in need of work; upon hearing the surname of the young teen, the father erupts in fury. All three stories are connected by that one fateful event and are drawn together in conclusion towards the end of the film.

The full extent of the incident is revealed towards the end of the film. From this, the audience is allowed to gauge if each of the character’s actions and reactions from the onset of the film is justifiable and fair.  All involved have formidable emotional voids and scars to deal with; the film ultimately is a study of forgiveness, compassion and redemption and if a single act of kindness begets further acts of kindness and generosity further down the years.

The film is ultimately a tribute to the little known story of Srdan Aleksic who has since come to symbolize humanity in the midst of chaos, hatred and conflict. The friend he saved, Alen Glavovic, has indeed built a new life (with two children) away from Trebinje, yet returns to his previous home each summer to visit Aleksic’s father and Srdan’s grave as a tribute to the man who laid his life down so that another could live. Such is Srdan’s legacy that his story is growing and he has achieved many posthumous awards such as Bosnia’s Helsinki Committee for Human Rights award and there are several buildings and streets named after him in Bosnia, Serbia and Montenegro.

A greater tribute to Srdan Aleksic would be for this well paced and wonderfully acted film to receive greater recognition so that his inspiring story can gain greater attention. The slow pace of the film is deliberate as we are allowed glimpses into each main characters secret pains and sufferings; the simple yet stunning landscapes and cinematography adds the perfect canvas for the story to unfold.

This was a profoundly moving film and one which I highly recommend.